While it did supplant the original E24 based 6 Series in 1989, a common misconception is that the 8 Series was developed as a successor. However, it was actually an entirely new class aimed at a different market, with a substantially higher price point and better performance than the 6 series. The 8 Series was designed as a direct competitor to the upcoming Mercedes-Benz SL-Class and S-Class coupes (later renamed the CL-Class). While it has less rear passenger volume than the sedan-based CL, the 8 Series could accommodate two passengers in the rear, while the SL roadster is a two-seater.

BMW is rumored to have plans to revive the 8 Series name for a potential "four-door coupe," much like the Mercedes-Benz CLS-Class. The existing E63/E64 6-Series two-door coupe currently completes with the CLS-Class in that price point.

History
Design of the 8 Series began in 1984, with construction starting in 1986. The 8 Series debuted at the Frankfurt Motor Show (IAA) in early September 1989. The 8 Series was designed to move beyond the market of the original 6 Series. The 8 and 6 Series cars were distinctly different in design; though both were Grand Touring cars, the 8 Series had substantially improved performance, as well as a far higher purchase price.

Over 1.5 billion Deutschmark was spent on total development (2005 USD $2.2 billion). BMW used CAD tools, still unusual at the time, to design the car's all-new body. Combined with wind tunnel testing, the resulting car had a drag coefficient of 0.29, a major improvement from the previous BMW M6/635CSi's 0.39.

The 8 Series offered the first V12 engine mated to a 6-speed manual gearbox on a road car. It was also the first vehicle with an electronic "fly-by-wire" throttle. The 8 Series was one of BMW's first cars, together with the Z1, to use a a multi-link rear axle.

While CAD modeling allowed the car's unibody to be 8 lb (3 kg) lighter than that of its predecessor, the car was significantly heavier when completed due to the large engine and added luxury items—a source of criticism from those who wanted BMW to concentrate on the driving experience.

Sales of the 8 Series were affected by the global recession of the early 1990s, the Persian Gulf War, and energy price spikes. BMW pulled the 8 Series out of the North American market in 1997, selling only 7,232 cars over seven years. BMW continued production for Europe until 1999, though only as the 840Ci. The ultimate worldwide production total was 30,621.


830i
Although sales were good in the first year on sale, the sharp reduction of the expensive 850i sales prompted BMW to develop an entry-level model. This was to use the 3-liter V8 with 218 bhp (163 kW/221 PS) from the 530i and 730i, known internally as the M60B30. Eighteen cars were produced, 13 of which had an automatic gearbox fitted. The model was dropped in favor of the 840Ci and all 18 development cars were dismantled.

The 840Ci was available with a 5-speed automatic transmission, though European cars were given the option of a 6-speed manual transmission. The only external features distinguishing the V8 model from the V12 models were the quad round exhausts, which were square in the V12 models.


850Ci
There is some confusion over why and when the 850i became the 850Ci. The change happened around the introduction of the 850CSi and it is believed that BMW decided to include the "C" in the model name to create more of a distinction between the 8 Series and BMW's sedans. The confusion starts when BMW installed the new M73B54 engine in the car. This was not an immediate changeover, and indeed both the M70 and M73-engined cars rolled off the production lines side-by-side for about nine months in 1994, both named 850Ci.


850CSi
As a top-of-the-range sports tourer, the 850CSi took over from the prototype M8. The 850CSi used the same engine as the 850i, which was tuned so significantly that BMW assigned it a new engine code: S70B56. The modifications included a capacity increase to 5.7 liters and power increase to 390 bhp (291 kW/395 PS).

The 850CSi's modified suspension included stiffer springs and dampers and reduced the car's ride height. The model also sported wider wheels, with the option of forged alloys. The front and rear bumpers were reshaped for improved aerodynamic performance. Four round stainless steel exhaust pipes replaced the square pipes found on other models. The 6-speed manual gearbox was the only transmission option.

Production ended in late 1996 because the S70 engine could not be modified to comply with new emission regulations without substantial re-engineering.


M8
One of BMW's best-kept secrets is the canceled BMW M8 Prototype. Originally envisioned as a Ferrari competitor, only a single prototype was ever produced, equipped with a special 550 bhp (410 kW) version of the S70 engine, essentially a bored out version of the M70 with experimental multi valve cylinder heads. A common misconception is that this engine eventually ended up in the McLaren F1. However, when this was suggested to McLaren's designer Gordon Murray, the idea was rejected because the engine was overweight and too long for the McLaren F1. A whole new engine was designed which has a closer resemblance to the later euro S50B30 BMW M3 engine.

The project was eventually scrapped because BMW decided that there was no market for an M8. The only prototype ever produced (one that was reportedly not even road safe) was locked away by BMW in the company's Giftschrank (poison storage) and has reportedly been destroyed[1].

While the M8 was never produced, it is interesting to note that the 850CSi was also tuned by BMW's "M" division. Aside from sporting an M-tuned engine (as identified by the S suffix instead of the M prefix that a true M car would wear), the car's VIN identifies the car as being built by BMW Motorsport (identified by the WBS prefix) instead of BMW AG (WBA prefix). This effectively identifies the 850CSi as essentially a detuned version of the M8[2].


Racing Dynamics K55 Sport Coupe
BMW tuner Racing Dynamics of Italy in 1991 produced a special version of the 8 Series dubbed the K55 Sport Coupe taken from the standard production line. The K55 5.5 Coupe was based on the 850i, powered by the 5.0-liter M70 that was stroked to 5.5 liters, new valves, camshafts lifters and intakes along with extrude honed heads. The one US version engine producing 475 bhp (354 kW/482 PS) and the Euro version producing 401 bph. 40 K55s were produced for the Euro market and one in the US. In addition to engine modifications, The K55 offered a variety of body, suspensions, rear end options. References 02/1994 Euro Magazine Road & Track, Car And Drive [3]


PowerPlant Racing BMW 860i
Race car tuner PowerPlant racing of North Carolina, USA produced the most powerful Naturally Aspirated 8 series BMW. This was done by increasing the displacement of the M70 V12 engine to a 6.0L capacity.


BMW CS Concept
Main article: BMW CS Concept
BMW launched a "BMW CS Concept" in the second quarter of 2007. BMW showed interest in reviving the 8 Series as a 4-door coupe to compete against the Mercedes-Benz CLS-Class. 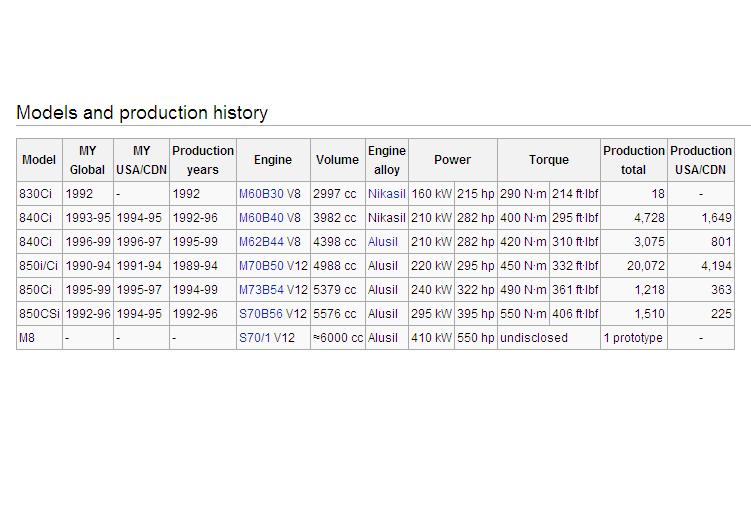